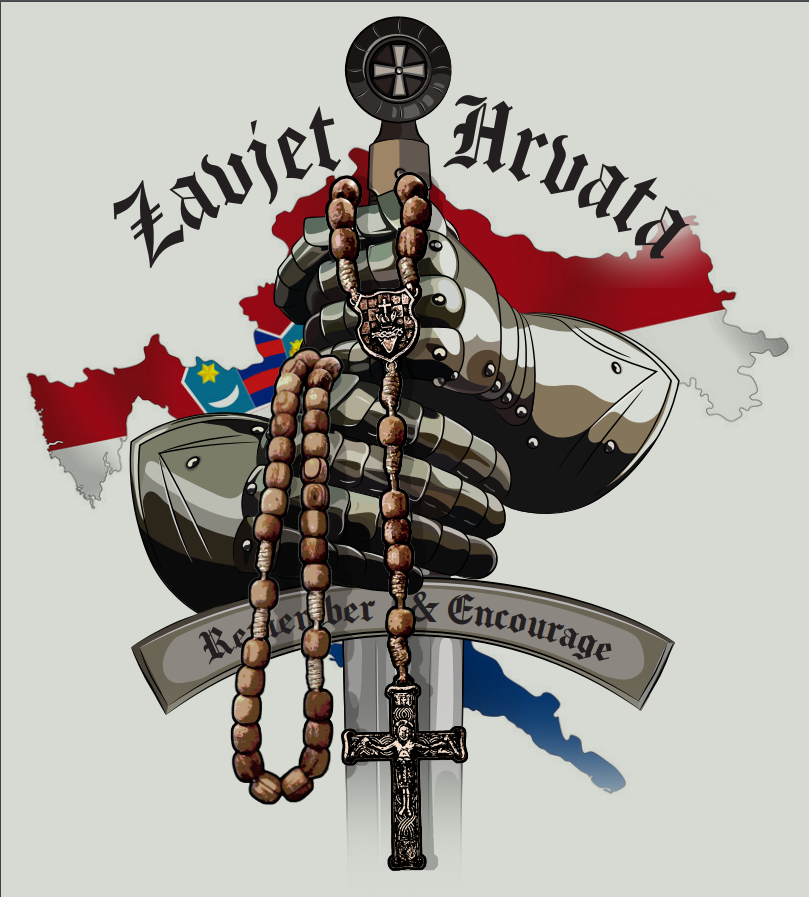 Reflecting on the inspiration behind this unique rosary

The “Hrvatska Zavjetna Krunica” encapsulates the most treasured moments of our nation’s sacred past. These are historical moments that forged an indelible bond of union between the Catholic faith and the Croatian identity. These events are the main inspiration behind the creation of this very special rosary.

The most significant of these events is Croatia’s Great Jubilee of 641-1941, which celebrated the 1300th-year anniversary of her baptism. As far back as the late 1930’s, Blessed Aloysius Stepinac planned to commemorate this momentous anniversary of the establishment of formal relations between the Holy See and the Croatian people. Although his plan was interrupted by the war, it was not forgotten. Thanks be to God, the Croatian bishops revived this significant memorial celebration in the early 1970’s and decided to thank God, over a 9-year period (a 9-year novena), for the gift of baptism, faith and belonging to the Catholic Church.

Two other events were also strongly inspirational in the creation of the Hrvatska Zavjetna Krunica. The first of these occurred at the dawn of the 20th century, on the 22nd June 1900, the feast of the Most Sacred Heart of Jesus, when a staggering 160 000 young Croatian men and women made a covenant (zavjet) to fight under the banner of, and consecrated themselves to, the Most Sacred Heart of Jesus. The second of these happened in 1979, named ‘Branimir’s Year’, as it was the 1100th-year anniversary of the grand occasion in 879AD when the Croatian people, as a nation, first professed their covenant (zavjet) with Our Lord under the leadership of Prince Branimir. During ‘Branimir’s Year’ of 1979, the Croatian people renewed their covenant (zavjet) with Our Lord. The Croatian ‘Zavjetni Križ’ and the prayer ‘Ispovijest Vjere Hrvata Katolika’ were specifically created for this memorial. Both of these events inspired the naming of the Hrvatska Zavjetna Krunica.

The Crucifix on the Rosary

The Zavjetni Križ or ‘Covenant Cross’ was chosen as the crucifix for this unique rosary because of its historical, religious and cultural significance. The Zavjetni Križ of ‘Branimir’s Year’ is a symbolic catechism of our faith and of the history of our salvation. It is a sign that we Croats, as a people, have been baptized from long ago; that through the turbulent centuries the cross was, for us, a sign of salvation and a guarantee of the future; that we are a people who weaved devotion to the Blessed Virgin Mary as an essential element into our national soul, and that throughout our entire history we have been a Catholic nation in union with the Pope.

Two additions were made to the reverse side of the Zavjetni Križ – the inclusion of our national slogan ‘Bog i Hrvati’ in our ancient Glagolitic script (‘Glagolica’), and beneath this slogan, the inclusion of our traditional Croatian coat-of-arms (‘Hrvatski Grb’). With these inclusions the reverse side of the Cross encompasses, in order of importance, God, Family, Homeland (‘Bog, Obitelj, Domovina’). God is first, in the prime position, above all other inscriptions; secondly, on the horizontal cross-bar, is our obligation to family; then at the bottom, our love for our homeland, Croatia.

The Hrvatska Zavjetna Krunica is the only rosary to feature a uniquely Croatian centrepiece, namely, the Zavjetni Medal (Covenant Medal). The front of the Zavjetni Medal showcases the Zavjetni Grb which is inspired by devotion to the Sacred Heart of Jesus and this devotion’s manifestation in the history of the Croatian people.
This design (superimposing Our Lord’s Most Sacred Heart on the Croatian coat-of-arms) was first used on the ‘Miles Christi’ Croatian emblem, created for the inaugural National Croatian Men’s Conference of 2019. This emblem became the inspirational starting point for the centrepiece design.

Such a beautiful starting point was also reminiscent of the consecration event of 1900, when 160 000 young Croatians pledged their commitment to the Most Sacred Heart of Jesus.

To strengthen the link to this great event in Croatian history, the Sacred Heart image used for the Zavjetni Grb on the Zavjetni Medal was reworked to be a replica of the actual gold ‘Sacred Heart’ gifted to Pope Leo XIII by the Croatian youth while on their pilgrimage to Rome in 1900. To further commemorate this event, the coat-of-arms (‘Grb’) shape was formed into the same shape as the ‘Grb’ that was used in the literature for the preparations for the 1900 youth consecration event.

The Hrvatska Zavjetna Krunica’s unique beauty lies in the way it links us to our two homes, a temporary yet beloved one here on earth – our Croatian homeland, and the eternal home we yearn for too – Heaven. This rosary’s unique Croatian character and wealth of cultural and religious meaning is further enriched by the fact that its creation is the result of a collaboration between the Croatian diaspora – those living away from home, as it were – and their brothers and sisters back in the homeland, particularly those who sacrificed all to defend the homeland in her hour of greatest need, the ‘Branitelji’.

The original design concepts and illustrations of the Zavjetni Medal (Covenant Medal) were produced by two Croatian Australians working together. This working partnership also conceptualised the design of the reverse side of the Zavjetni Križ. On the other hand, the 3D drawings of the Križ, as well as the models of both the Zavjetni Križ and Zavjetni Medal models, were the result of the work of a designer in Croatia. The final production and plating of these two crucial elements of the rosary were also done in Croatia.

The wooden bead version of the Hrvatska Zavjetna Krunica has a particularly poignant background, showing how the diaspora and the Croatians still in the homeland are tied by a mutual love for each other, grounded by love of God first. This wooden rosary is produced by a woman in Croatia that is blind. Making the rosaries provides Marijana and her family with some income to help them make ends meet. In turn, those who purchase and use the rosaries she makes engage both in spiritual and corporal acts of mercy.

Finally, the mammoth task of connecting the team from the diaspora with the team of people from Croatia was undertaken by a retired Hrvatski Branitelj, whose involvement in the project demonstrates that a true Branitelj labours for his people on the spiritual plane as well as on the physical plane.

The Hrvatska Zavjetna Krunica has a two-fold aim – Remember and Encourage.

Remember our nation’s sacred past. Remember that “we have existed for over thirteen centuries. The very fact that we began to exist as an organic people thirteen centuries ago and that we still exist today is something remarkable, something that carries a deep meaning and inexhaustible vitality and a certain mission.” (1) Our nation’s sacred past is succinctly summarised in the rosary’s crucifix, the Zavjetni Kriz (‘Covenant Cross’) and its centrepiece, the Zavjetni Medal (Covenant Medal).

“Thirteen centuries of Christianity of the Croatian people. It is an immense grace, and the reason for lasting gratitude to the Divine Providence, for the Croatian people – the first of the Slav nations – who were brought out of the darkness of paganism and led into the light of true faith. (….) This jubilee celebration is ending with this National Eucharistic Congress. (…) You have chosen the best way to crown the celebration of this anniversary, thus focusing the attention of the whole community of believers to the essential reality of our faith: the Most Holy Eucharist! (…) May this Eucharistic Congress be for all of you – both a coming and a starting point. (…) Reinforced in Spirit continue in this blessed land of yours for works of salvation which Christ the Lord has entrusted to us!“
From the message of Pope John Paul II for NEK (2)

“We well know your faithfulness. Still, allow me to touch you with my strength. By your perseverance you have made a unique covenant with Christ and the Church, it is up to you, to remain faithful to that covenant, no matter how hard the opposition. As you have been, since the glorious year of 879, so always remain, Bishops, Presbyters, all Catholic people, closely connected and attached, remain one whole, one soul, one Will, faithful in covenant with Christ, faithful in covenant with the Roman Catholic Church. This Church, always grateful to the Croatian people with witnessed love and obedience, still thanks you very much today through us, since you have made us very happy with the same witness. At the same time, she assures you how much she appreciates this alliance and how close you are to her heart, not only by the proximity of your borders, but above all by great love.“
From the message of Pope John Paul II, 1979 (3)

The Hrvatska Zavjetna Krunica is currently available in two options (pictured below).