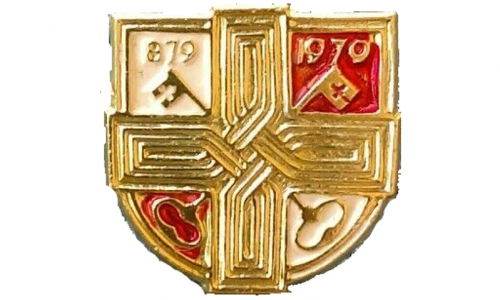 In the second half of the 20th century, the Catholic Church in Croatia, implemented a project to commemorate thirteen centuries of Christianity of the Croats.

It consisted of several major celebrations:
1975/76 Croatian Marian or Jelena Year.
1978, at Solin, Zvonimir’s year.
1979, near the Diocese of Knin, in Nin, Branimir’s year.
1984, the National Eucharistic Congress in Marija Bistrica.

1979, marked the year of Branimir. The 1100th anniversary of the exchange of letters between Prince Branimir and Pope John VIII. And the renewal of the alliance of the Croatian people with the Holy See. The papal blessing and recognition had particular weight in the early Middle Ages – the Popes were the greatest international authority with the right to recognize the legality of rulers and authorities in a country. Pope John VIII, sent a letter to the Croatian prince Branimir in 879, during the time of the Nin Bishop Theodosius, announcing that he had served Holy Mass for him and the Croatian people on the feast of the Ascension of the Lord (May 21, 879), at the grave of St Peter and blessed the entire Croatian people and prince Branimir. As the ruler, who renewed the alliance with the Church of Rome, recognizing his princely authority and Croatia as an independent state.
This act signified the ultimate affiliation with the western circle of countries and Latin culture, as opposed to being subjected to Byzantium and the Patriarch of Constantinople. On the eve of the 1979 celebration, a national pilgrimage by Croatian bishops and believers to Rome was organized with the newly elected Pope St. John Paul II. In this way, he blessed the pilgrimage which could not be undertaken, by Blessed Aloysius Stepinac, (1941 due to war) – a great national pilgrimage on the occasion of the 1300th anniversary of the first connections of the Croats with the Roman Church (641-1941).

John Paul II then became the first pope in history – on April 30, 1979 – to celebrate Holy Mass for Croats in the Croatian language. The great public celebration of Branimir’s year was held on September 2, 1979, in the area of Grgur, near Nin, the Croatian royal city and the first political and ecclesiastical centre of Dalmatian Croatia from the time of the Croatian “national rulers” (9th-11th centuries). Holy Mass, was led by Cardinal Franjo Šeper, the Pope’s envoy, in conjunction with all Croatian bishops and hundreds of priests and monks. It was, until then, the largest gathering of Croatian believers, at the time of ungodly communism. At that time, the Church gave a vow to the Croats, which was expressed in the motto: “Croatian Catholic family prays daily and celebrates Mass on Sundays.”
For this occasion, the Croatian Testament Cross was designed and constructed as the main symbol of Branimir’s year. This Cross is a summary of Croatia’s religious history and the faith of Croat Catholics. A campaign was then launched to bring this cross into the homes of every Croatian Catholic family. Today, we are renewing that idea and continuing it.

Translated into English from original article in Croatian at  https://zavjetnikriz.hr/

The Story of the Croatian Covenantal Cross