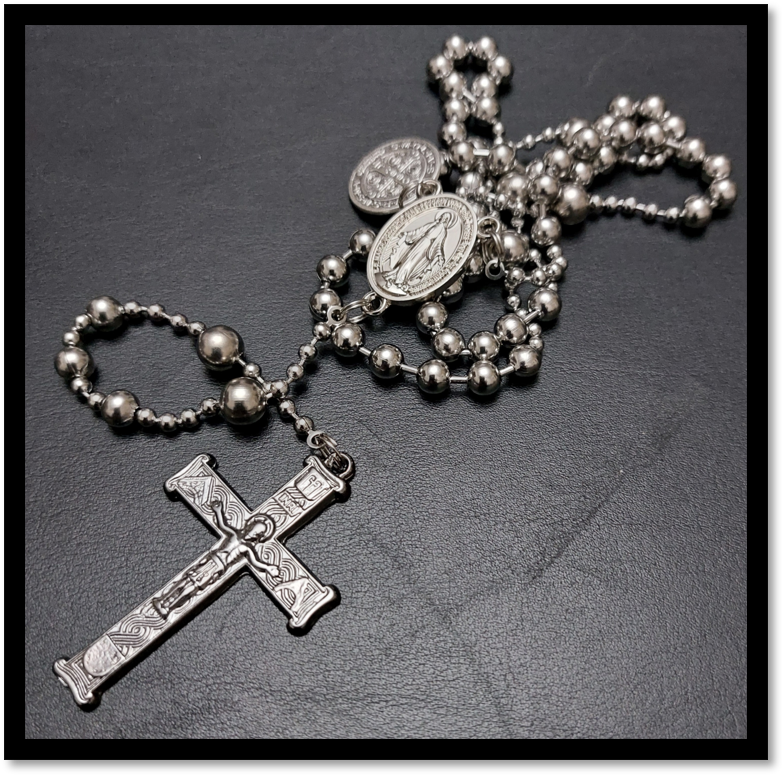 The Story of the – Cro Combat Rosary

Shortly after the Knights of the Most Precious Blood were formed in 2015, the group’s logo was designed and confirmed by the founding members. The logo was intended to embody the charism and chivalric code of the Knights, combining fidelity to Christ with Croatian heritage.

The founding members all agreed that the Knight’s logo should include a shield in the colours of the Croatian emblem (grb), with the Cross of Our Lord as the centerpiece of the shield. This was to emphasize the belief that the Holy Cross is our shield and our victory. Our Lord shed his Most Precious Blood on the Cross for us and it is the Most Precious Blood that we call upon daily for our protection. The rays emanating from the Cross represent the glorious victory over death that was won by our Lord on the Cross. This glory of the Cross, the victory of the Blood of the Lamb, is our Shield and our Strength.

With the foundation of the Knights and their logo settled, the idea of Knights needing a weapon to combat with began to materialize. Our Queen, the Blessed and ever Virgin Mary, gave to Catholics the ultimate weapon in the fight against Satan and our enemies. From the very beginning of the Knights, the need to have a manly rosary, that is, a special, sturdy rosary for the Knights of our order, became evident. The traditional, chain-link rosaries had a tendency to come apart when they were carried in pockets or worn. Consequently, the search for a tough, manly rosary began. In the course of online research, the Knights came across a rosary manufacturer with whom they had discussions with, hoping to produce a rosary from stainless steel, a naturally robust material. Unfortunately, this lead did not materialise, and the search continued.

Undeterred, the Knights continued their search. By God’s providence, the first chain manufacturer that they contacted advised that they could manufacture the rosary the Knights wanted, as they had done similarly styled items in the past.

Overjoyed at this joyous news, the Knights discerned the need for a specifically Croatian version of the pull-chain combat rosary. The Knights deemed that the “Hrvatski Zavjetni Križ” (Croatian Covenant Cross) would be the best crucifix for this uniquely Croatian rosary due to its great significance to the Croatian people. It is a sign of our sacred Catholic history and identity, and is a symbol of our covenant with God. This traditional crucifix was sourced from Croatia.

After conducting research into the early designs based on the visions of the Miraculous Medal, the Knights noticed that the records of the visions did not ever mention the inclusion of the stars typically found on the reverse side of most of the available Miraculous Medal designs (most often five-pointed stars, however in some designs, stars were and six-pointed). Croatians naturally have a strong aversion to the ‘petokraka’ (five-pointed star) as they were under cruel oppression for 50 years or so under the tyrannical and evil Communist regime, whose symbol was the red ‘petokraka’. For these two reasons, the Knights did not include the stars in their version of the Miraculous Medal.

The other feature included on most medal designs but not recorded in the visions is the ‘1830’ atop the globe on the front side of the medal, and again, for this reason, the Knights decided to omit this feature in their design. Also, the lettering on the original medal design was in French as St Catherine Laboure, the Saint to whom the design of the Miraculous Medal was first entrusted, was French. For their Miraculous Medal, the Knights decided to go with Latin wording as Latin is the universal language of the Catholic Church.

The shape of the Knights’ Miraculous Medal is based on the earliest drawings of the medals, which were slightly wider across the center section of the medal. The other unique element of the Knights’ Miraculous Medal design is the incorporation of the Croatian ‘pleter’ (weave) on the Cross. Most Miraculous Medals have cross-hatching patterned inside the Cross, and in the ‘M’ on the reverse side of the medal to emphasize these elements more. A supplier was sourced to produce a 3D model of the group’s design so that samples could be checked before mass production began.

The Knights perceived that the men needed a practical, masculine carry case for their Croatian Combat Rosary. The simplest, most practical idea that came to mind was the old-fashioned leather rosary or coin pouches, with spring metal strips that held the pouch closed. Squeezing the sides would make the spring bow out and open the pouch. The pouch could easily fit in a pocket and would be able to be opened and closed with one hand. It would not have any clumsy zippers that can be a bit noisy in quiet Church environments. The Knights decided to have the St Benedict Medal embossed on the pouch for their unique Croatian Combat Rosary, as the Rosary is the spiritual weapon for our times.

To accompany this new rosary, the Knights included a masculine ‘how to pray the rosary’ card. They designed a unique military-style fold-out card with another fold-out card that gave an overview of the symbols on the medal and the crucifix and their meanings. This card would fit neatly in the two external pockets of the pouch (front and rear).
With the grace and inspiration of God, the journey to create a unique Croatian Combat Rosary package was finally realised. In addition to the traditional ‘Pardon Crucifix’ combat rosary style, the newest option, the traditional or the “Zavjetni Križ” style, has become, by far, the most popular preference among Croatian men.

Currently the Cro Combat Rosary is available in the following styles.