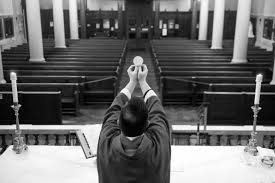 The Pandemic of the Non-Believers

“Government mandates for COVID – mask wearing, lockdowns, social distancing, sanitising, vaccines, and now vaccine or health passports.” These are words which are continuously bombarding us through the television, newspapers, social media and even in our personal conversations. Their subject, COVID, has so gripped the whole world with fear that it has become the predominating focus and attention of almost every person on this planet. But at what cost?

I am a father of 4 children. My youngest, who is 7 years old, made a statement recently that stopped me in my tracks. She said, “Dad, I can’t remember what life was like before COVID”. For a second, completely taken aback, I had no words with which to reply to her. My daughter’s comment forced me to hold back the tears that were welling inside of me for her, and not only for her, but for all who were feeling like her. The sadness in her voice impelled me to turn to deep contemplation, reflection and prayer.

Whether COVID is man-made or naturally occurring, whether people are dying with COVID or from COVID, whether vaccines work or don’t work, the heart of the matter is that our churches are closed. The faithful are denied access to rightful worship of God and the sacraments. The great apostasy has, and is, occurring – there has already been a great exodus of Catholics leaving the Church, and a great many of those who remain are denying the Real Presence of Christ in the Eucharist, denying the power of the sacraments, and accepting abortion and illicit unions. The errors and heresy of Modernism are running rampant. Church closures, sanctioned by the majority of our bishops, have only added fuel to this great departure from the faith. The confusion and lack of direction from our bishops is clearly apparent. This great apostasy is the real pandemic!

People are being conditioned to invest their trust into science and the government for their protection and livelihood. They have abandoned or forgotten God in their greatest time of need. One has only to look at human and Church history throughout the Scriptures and throughout past ages to see that we have been here before. How quick we are to forget!

The Old Testament records various outbreaks of endemic disease, perhaps not too dissimilar to coronavirus, which prompts one to ask why God permits endemic diseases. In the Bible God expressly tells us that the reason He sends plagues and diseases on His people and on His enemies is “to make you see My power” (Exodus 9:14, 16). God sent plagues on Egypt to force Pharaoh to free the Israelite’s from bondage, while sparing His people from their effects thus indicating His sovereign control over diseases and other afflictions (Exodus 12:13; 15:26). God also warned His people of the consequences of persisting in sin, one of which is being afflicted by plague (Leviticus 26:21, 25). Two such occasions are recorded in the Scriptures – one where 14,700 people died (Numbers 16:49) and another where 24,000 people died (Numbers 25:9) in a plague sent by God. After giving the Mosaic Law, God commanded the people to obey it or else suffer many evils, including disease and plague (Deuteronomy 28:22). These are just a few examples highlighting the plagues and diseases sent by God in response to sin.

It can be hard to imagine a loving and merciful God displaying such anger and wrath toward His people. But God’s punishments always have the goal of repentance and restoration. We read in the Catechism of the Catholic Church:

“The fact that God permits physical and even moral evil is a mystery that God illuminates by his Son Jesus Christ who died and rose to vanquish evil. Faith gives us the certainty that God would not permit an evil if he did not cause a good to come from that very evil, by ways that we shall fully know only in eternal life”. (#324)

This is echoed in the book of Chronicles in the Bible, when God says to Solomon:

“When I shut up the heavens so that there is no rain, or command the locust to devour the land, or send pestilence among my people, if my people who are called by my name humble themselves, pray, seek my face, and turn from their wicked ways, then I will hear from heaven, and will forgive their sin and heal their land.” (2 Chronicles 7:13-14).

There is no doubt that the disease called coronavirus and the effects of this so-called pandemic have adversely affected humanity. Rather than moving closer to God and seeking His forgiveness in a spirit of humility, humanity is moving further away from God, a God who can heal both body and soul (Matthew 10:28). I am not discrediting or belittling the benefits of modern medical science that is used to serve bodily health, but this unwavering faith in modern science has come at the price of trust in God, Lord of both the body and soul.

In Biblical times of plague, kings and priests had no trouble humbling themselves through fasting and prayer and the putting on of ashes and sackcloth as public manifestations of their interior repentance (cf. 2 Kings 19:1; Joel 1:13). Where is this manifestation of repentance today? Where is the call for public repentance through prayer and fasting to the laity and the clergy from our bishops and priests? Where are the public processions and Masses offered specifically for an end to this pandemic?

In the year 590 AD, Pope Gregory I called on the entire Church in Rome to process from their seven regions to Santa Maria Maggiore in solemn prayer asking God for pardon to end the plague which besieged the city for 50 years at that time. Legend has it that St. Michael the Archangel ended the plague by standing on the Mausoleum of Hadrian and sheathing his sword to show that the people’s prayers had been answered.

One of the worst pandemics in history – the Black Death Plague (or the Bubonic Plague) – was also the setting for a prime example of the Church and her bishops leading the people in prayer and repentance. During the Black Death Plague, in 1348, Pope Clement VI, in consultation with the Bishops, had the Votive Mass in Times of Pestilence said. The people repented and fasted and attended the Votive Mass for the Deliverance from Death in Time of Pestilence. Why is this not happening today? Why are our Church leaders not calling for this Mass and not calling for repentance, prayer and fasting? Instead, churches are closed and the faithful are advised to stay home, obey government orders and follow medical advice given by politicians.

It is time for the faithful once again to make a public stance by witnessing to the importance of repentance, prayer and fasting. It is time to put on sackcloth and ashes like the people of the Old Testament. If the bishops and priests do not once again say the Mass to end the plague and lead the people into repentance, then it could very well be that the laity will have to lead by example. My daughter does not remember what life was like before COVID. I do not want this to be the ‘new normal’, a life where churches are closed and deemed non-essential. I do not want my daughter to live through a life with no memory to recollect of her father, her mother and the faithful fighting for the Truth, fighting for the preservation of their faith, setting an example for future generations. And if this was to happen, and upon reaching the gates of Heaven, we would be able to show our Lord our credentials, that we were of the generation who fought for their faith, trusting in the Lord.

What credentials will you show on your passport when you stand at Heaven’s door? What have you, Catholic man and father, done to protect your home from this pandemic, from the infection of sin entering your home, from taking and isolating your family members away from the One True Faith?

If you haven’t done so already, call a Catholic priest to bless your home and your family. Place a blessed crucifix in a prominent place in the home. Consecrate the house to the Sacred Heart of Jesus. Enthrone the Sacred Heart as King of your home and family. Use blessed water and exorcised salt to keep the infection of sin away. Lockdown some time for praying with the Scriptures and spiritual reading. Arm yourselves with prayer, fasting and the family Rosary to increase your immunity. Our Blessed and Immaculate Mother will never abandon her children. Recall the story of St John Bosco in Turin during the cholera epidemic of 1854. He asked the young men he commissioned to visit the sick to carry an image (or medal) of the Virgin Mary with them and to pray regularly. None of them got infected. Men, you are being commissioned to do the same.

I want to leave you with the words of Saint Gregory the Great who said this during the pandemic in 590 AD:

“It is fitting, beloved brethren, that the punishment of God, the coming of which we should have feared, as we fear now when we bear this punishment. May this suffering, as a means of supplication, open the door to God, and the very suffering we endure would crush the stiffness of our hearts … So, let each of us seek protection in repentant lament, while there is time to cry.”

Will you do your part to end this pandemic? What credentials are on your Heaven’s passport?

Fear or Faith? The choice for Freedom