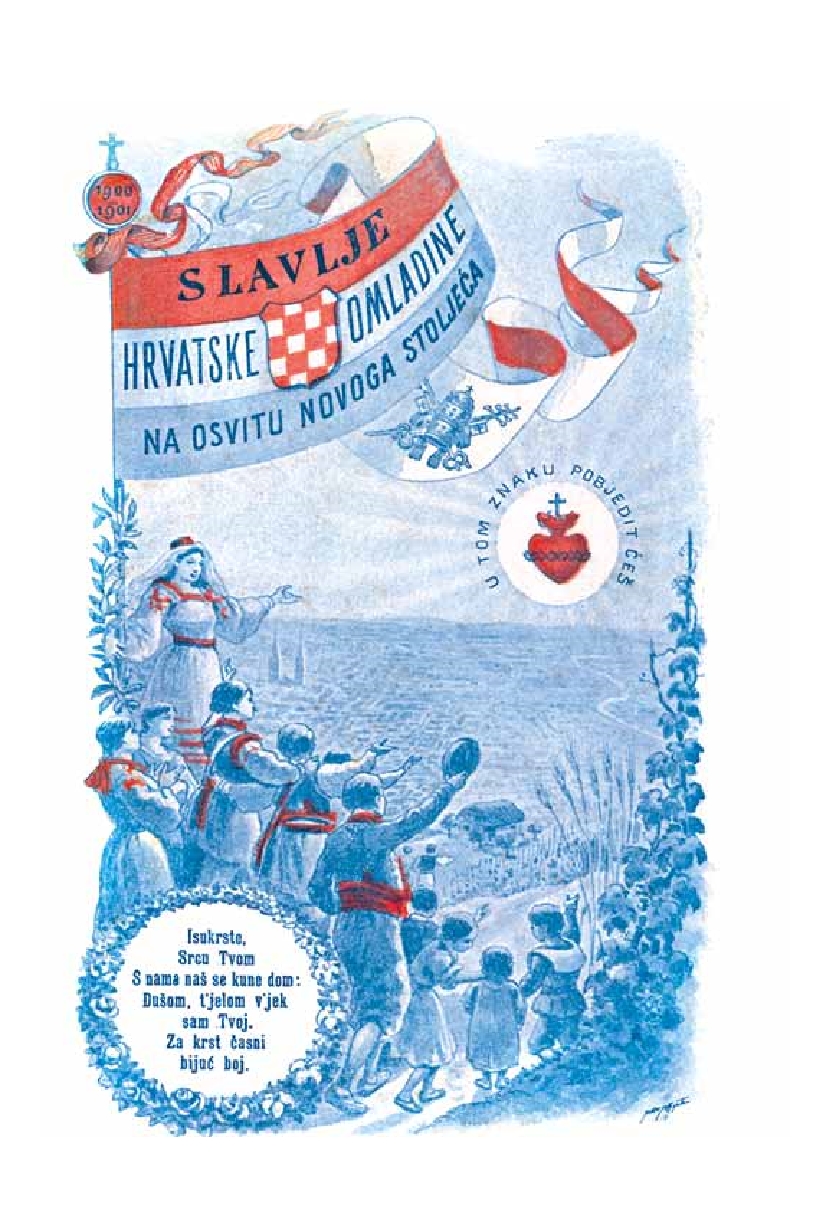 The consecration of Croatian youth in 1900, was a unique manifestation of faith not only in the history of the Church among Croats, but also in the entire Catholic Church, because no country of Catholic tradition recorded a similar religious event at the beginning of the 20th century. The Memorial was prepared and supplemented with texts by Jesuit, Anton Puntigam, who was the originator of the idea of the whole enterprise. He was then in the service of the Archbishop’s Seminary and High School in Travnik, in Bosna, run by the Jesuit Fathers.

This reprint edition of the Memorial is in three parts. After the preface and introduction, part one, is a 32-page preparatory brochure entitled Celebrating Croatian Youth at the Dawn of the New Century. The brochure was published in the early 1900’s as a preparation for the Consecration itself – which took place on the Feast of the Sacred Heart of Jesus, June 22, 1900. As many as 50,000 copies were printed and distributed throughout Croatia, Bosna and Herzegovina. Then follows the second and main part – the 238-page Memorial book itself, which was originally published in the following year, 1901. In it are reports and descriptions of how the Consecration was made in all Croatian dioceses. The third part, is an added appendix, which provides an overview of how the Consecration was renewed in later decades, specifically 1910, 2000, 2001, 2010, 2015 and 2020.

A reprint of this Memorial book on the Consecration of Croatian Youth to the Sacred Heart of Jesus was published jointly by the Basilica of the Heart of Jesus in Zagreb, and the Postulator of Blessed Ivan Merz. The foreword to this reprint edition, was written by the Archbishop and Metropolitan of Vrhbosna, Cardinal Vinko Puljić, as this idea was initiated from the Vrhbosna Archdiocese. Specifically from Travnik, where the Consecration hymn, “Do nebesa nek ori ” which was sung for the occasion of this Consecration was written by Petar Perica, a high school student at the time, who later became a Jesuit and ended his life by martyrdom in 1944 on the island of Daksi, near Dubrovnik shot by communists. This hymn has remained with the Croatian people to this day, as a lasting monument in the hearts of Croatian believers, for this magnificent event.

In his preface, Cardinal Vinko Puljić writes, among other things: “I look forward to this reprint edition of the Memorial in order to preserve the memory of this unique religious event in our nation, and in these times when hopelessness and collapse of values, both young and adults, solidifies hope and gains inspiration for a better future. It is necessary for young people to re-open the door of the Sacred Heart to be strengthened in faith and find the source of love and through that find the right path for their self-realisation. “

To this day, the Croatian people have three memories of this Consecration of the youth do Sacred Heart: the hymn Do Nebesa, the book Spomenica-Memorial, now re-issued as a reprint edition, and a large ceremonial flag, made in 1910 for the renewal of the Consecration.

It is the desire of the publisher that today’s generation of Croatian youth, as well as all the faithful Croatian Catholic people, encouraged by the example of our ancestors, continue to worship the Sacred Heart of Jesus and live the Consecration as expressed in the verses of the Consecration hymn: With my soul and body forevermore I am yours, fighting an honourable battle for the Cross. (“Dušom tijelom vjek sam tvoj za krst časni bijuć boj.”)

More articles on this momentous event from our nations past:

– Part 4 (The 100th anniversary of the consecration)

For more information on this event in Croatian see links below.

Consecration of Croatian Youth to the Sacred Heart of Jesus AD1900