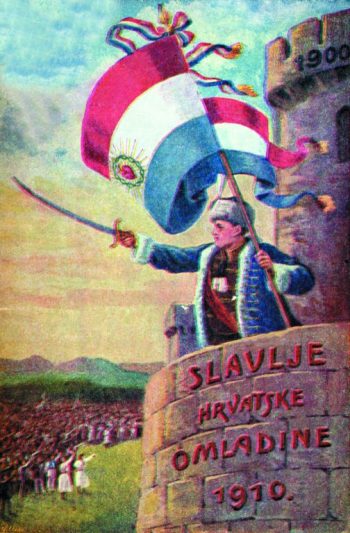 1910 – Year of renewal of the Consecration

For the 10th anniversary of 1910, a renewal of the consecration was organised. A booklet – “Celebration of Croatian Youth 1910”, about Petar Perica on pg64, printed 40,000 copies – spiritually prepared the renewal of consecration and was led by the central committee under the auspices of the Archbishop of Zagreb Juraj Posilović. The chairman of the committee, was assistant Bishop and vicar general, Dr Ivan Krapac. On 15 February, the committee sent a solemn proclamation to all dioceses’ calling on the youth for the renewal. The religious magazine, Glasnik Srca Isusova no 3-9, had extensive presentations of preparations and descriptions of the celebration of the renewal of the consecration that took place on the Feast of the Sacred Heart of Jesus, June 1910. Thousands upon thousands of young Croats in all Croatian dioceses’, reaffirmed and witnessed to their faith and devotion to Jesus Christ.

This renewal of consecration, confirmed ties to the representative of Christ in Rome. The central committee sent St. Pope Pius X a special letter informing him of the renewal of the consecration on behalf of the Croatian youth reaffirming their faithfulness to Jesus Christ and his Sacred Heart, and requested the Holy Father’s Apostolic Blessing. On the day of the consecration, a telegram was received from the Pope with an Apostolic Blessing, sent by the Secretary of State Cardinal Merry de Val, to those Croatian youth that participated in the renewal, the greetings, thanks and blessings of the Pope.

After the celebration and consecration in the July issue, Glasnik Srca Isusova, brought an extensive account of the attempts of liberals and other anti-clerical associations who in any which way wanted to prevent or at least impede the holding of the renewal of the consecration. A shorter view of how it unfolded is described. In our present day it is difficult to comprehend this real battle between the organisers of the consecration and the Catholic youth on the one hand, and the liberal and anti-clerical elements on the other. (Glasnik Srca Isusova no7, 1910 p.128)

In late February, after the established committee for the renewal of the consecration launched various preparatory actions for the ceremony, the High Croatian Land Government issued order no. 4851. which granted on the Feast of the Sacred Heart of Jesus, 3 June 1910, all Catholic youth a holiday, and that under the guidance of their catechists and teachers they could participate in Holy Mass and so to understand the meaning of the holiday and their own consecration. Secondly, the government approved the collection of donations among young people in school to cover the cost of holding a celebration for the anniversary of the consecration to the Sacred Heart of Jesus.

This government’s order was reacted to by the Liberals in the newspaper “Pokret”. The article states, among other things “Dr. Amruša’s order is nothing other than a direct provocation of all free-thinking elements in Croatia, and these elements will know and suppress it. Let the head of the department for worship with silk flags, Dr. Amruš, have no doubt about that.”(Pokret no. 56, 10.3.1910) Other atheistic newspapers had written similarly.

A few days before the ceremony, on 30 May, so-called “Progressive” students of two high schools began handing out leaflets issued by their senior fellow students in Zagreb. The leaflet was full of callous insults and slanders at the expense of the Pope, Archbishop and clergy, and against the collection of contributions for the consecration. Glasnik Srca Isusova unmasked those who stood behind it and called them enemies of God, “socialists, revolutionaries, freemasons.”

The next day, 31 May, a second leaflet was published, this time by the Catholic side, printed 10,000 copies, within it the “revolutionaries” are unmasked along with their intentions and mode of operation.

The day before the consecration, “the revolutionaries” with the aid of the social democrats issued a leaflet entitled: “Against clericalism” which read, among other things: “The celebration of the Sacred Heart of Jesus in 1900, in Croatia, made visible the origins of a clerical organisation. After that celebration it was followed by a Catholic congress, and then Jesuits arrived in Zagreb, and clerical institutes started to line up. No, as early as 1900, in the first place, the clerics set their gaze on the youth as yeast, from which a clerical guard would be born who would have to create clerical intelligence… What does it mean to hand over the school at the mercy and non-mercy of clerics? It means to plunge a knife in your living body, it means to cut your veins.”

The opponents of the consecration didn’t just settle for that flyer. A few days before the dedication in the “art pavilion”, there was an organised exhibition of images of erotic content rated by the secular media as immoral. Glasnik comments that it was “the greatest shamelessness of the kind not even pagans exhibited.” In the week before the celebration, they lowered the price of tickets for the youth, thinking that curious youth would flock to the exhibition. On the feast of the Sacred Heart of Jesus, they announced that for school youth it was free of entry to the exhibition. Not even through this incentive could they attract the Catholic youth who were about to renew the consecration on that very day.

As an immediate preparation for the celebration of the feast of the Sacred Heart of Jesus and the anniversary of the consecration, in Zagreb’s Sokol Hall, a lecture with slides on the -Sacred Heart of Jesus was organised. “Enemies of God and of the Croatian people”, as the Glasnik named them, decided to disrupt this lecture and organised the same day, an hour earlier a protest assembly against the renewal of the consecration. The city was dogged by large billboards inviting citizens to their rally. A group of citizens outraged at their provocations disrupted their rally, which had to be disbanded. In their anger the “the revolutionaries” rushed to the Sokol Hall to prevent the presentation on the Sacred Heart of Jesus proceeding. There, they were prevented by members of the Catholic Society of “Domagoja” who stood guard at all the doors. However, the police had to intervene by using physical force to make orders so that the conference could take place. After the lecture, when visitors began to disperse to their houses, among them many priests and distinguished persons, they were greeted by “revolutionaries” who spewed various demeaning shouts and offensive expressions. Glasnik further describes:

“Only Satan could have put into their mouths their shameless expressions. The more they swore at the clergy and all that the Catholic’s hold near and dear to their heart, the more enthusiastic the faithful cheered: Long live the clerics! Long live victory! Long live the Priests!”

“The revolutionaries” continued to follow the clergy with their offensive shouts until they were dispersed by police in front of Kapitol. On the same evening, another group of “revolutionaries” gathered in front of the monastery of the Sisters of Mercy, which were especially associated with the consecration to the Sacred Heart of Jesus, and they stopped to shout: “Down with the Church! Down with the monastery!” The neighbours reacted sharply and they were forced to disperse. The peak of the opposition was on the day of the consecration. After a failed attempt by some libertarian principals to thwart the great procession that was planned for the feast of the Sacred Heart of Jesus, the civil authorities reacted immediately and again explicitly ordered all schools to participate in the procession together with their professors and educators.

When they failed to thwart the procession, a group of opponents decided to rush into the procession and hijack and burn the main symbol of the renewal of the consecration – the large flag of the Sacred Heart of Jesus. If it didn’t go to plan, after that, they would at least tear it apart with iron bars. However, on learning time of this true devil’s intent, the execution of this act was disabled. Both the consecration and the procession were solemnly held as programmed.

– Part 4 (The 100th anniversary of the consecration)