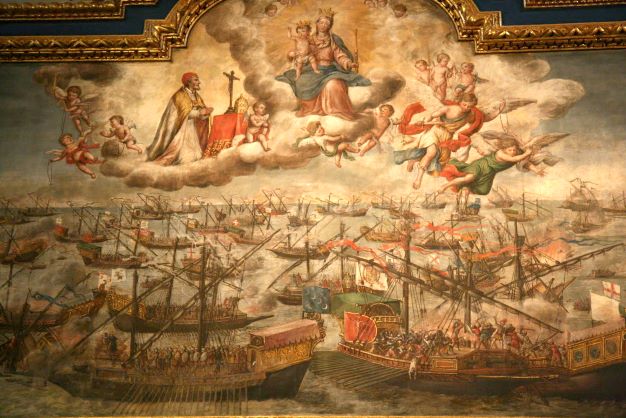 The beginning of the 16th century saw Europe experience the Renaissance. Not only a re-birth of culture and art, it saw the continued growth and revival of confraternities, such as the confraternity of the Rosary, which played a major role in reviving piety and devotion. Continuing on from the work of St Dominic, and the resurgence of the Rosary devotion by Blessed Alan de la Roche, men like Fr Jacob Sprenger of Colonge, Germany, continued the spread of the confraternity and had the honour of being the first to have it officially recognized by the Church on September 8, 1475, the Feast of the Birth of Mary. Remarkably, it was also the same day Blessed Alan died in Zwolle, Holland. It was also Fr Sprenger who is accredited as calling the Marian Psalter, the Rosary.

With the Church granting indulgences to the confraternities, they spread rapidly throughout Europe, as did booklets of images of the Joyful, Sorrowful and Glorious Mysteries and instructions on prayer from the writings of Blessed Alan with the inventing of the printing press. With the explosion of Renaissance artwork, it is believed that the most famous masterpiece of Italian Baroque painter, Michelangelo da Carravaggio, was donated by Croatian Nikola Radulovic of Dubrovnik, a member of the confraternity for the Dominican Church in Dubrovnik.

Despite the flourishing of confraternities, the Rosary devotion and artwork depicting Our Lady and the Rosary, Europe and the Catholic faith was not without threat. The protestant rebellion by Martin Luther, and the turning on Catholics in England saw a war rage against Marian devotion such as the Rosary. Heresy was running rampant across Europe while the physical attacks of the Ottoman Turks continued to threaten on all fronts.

It is well known to Croatians, that a decisive battle that “saved western civilisation” was fought at Siget (Szigetvár) in 1566. The 36-day siege of the fort by the 100,000 strong Ottomans lead by Sultan Suleiman I, was defended by approximately 2300 Croatian / Hungarians led by Nikola Zrinski, a Croatian noble and seasoned general. For nearly a month, wave after wave of Ottoman attacks were thrown back from the walls of the fort. Suleiman I offered Zrinski rule of all Croatia if he would yield his city to him, but Zrinski answered,

“No one shall point his finger on my children in contempt.”

The heroism of these men and the inspiration of Nikola Zrinski is forever remembered in the battle that saved Western civilisation. Despite losing his life in leading his men in heroic battle, Zrinski led his diminishing army on one last charge after taking the life of Suleiman I, which the Ottomans tried to keep secret for fear of losing morale. The courageous example of Zrinski and his small army who valiantly defended the fort enforcing heavy losses of up to 20,000 Turks, sent shockwaves among the Ottoman circles stalling their advancement on land. While the Croatians were fighting and defending Europe from the Ottoman invasion from land attacks, earning them the name, the Antemurale Christiantantis (Bulwark of Christianity) by Pope Leo X in 1519, the Ottomans were waging their attacks on Christendom on a lot of fronts, especially from the sea.

Fierce battles took place, not only on land but on sea. The siege of Malta in 1565, saw the 6000 Knights of St John, under the command of Jean Parisot de Valette, defeat and expel 40,000 Muslims from the island. In preparation for the battle, de Valette had a sword commissioned with the Rosary engraved on the sword! Despite this defeat, the Ottomans regrouped to strike again. Knowing the real threat to Christendom, Dominican Pope, St Pius V, called for an assembly of an army, a Holy League, to defeat the Islamic threat with two kinds of swords – that of steel and the other, the spiritual sword of the Rosary.

Pope St. Pius V used all the influence he had to get the Christian states of Spain, Naples, Sicily, Venice, Genoa, Sardinia, Savoy, Urbino, Papal States, Germans, and Croatians to assemble into the Holy League. Eight galleys from the eastern Adriatic coast of Croatia took part in the battle: from Kopar, Cres, Krk, Rab, Šibenik, Trogir, Hvar and Kotor. The largest among them was the ‘Cristo Ressussitato’ (“Resurrected Christ”) trireme from Krk under the command of the sopracomito Ljudevit Čikut, whose grave is located in the Krk Cathedral as the only known grave of a Croatian galley commander.

The 24 year old, Don Juan of Austria, was chosen by Pope St. Pius V to lead the fleet. Not only had he proven himself in battle defending attacks from the Moors in southern Spain, he was chosen by the Dominican Pope due to his devout Catholic belief and chivalric love for Our Lady, Queen of Heaven. It is said of him that he was the last true knight of Europe. Quoting direct from Fr Don Calloway’s book, Champions of the Rosary we read of Don Juan:

“ Indeed, Don Juan had been sent from God. The young captain knew that he was about to engage in a holy war with Islam. Prior to sailing off to war, he gave orders that all blasphemy was forbidden on his ships and required that all of his men fast for three days. He forbade women from entering his vessels, lest any of his men fall into sin of lust and mar their souls before battle. He ensured that his vessels would have Jesuits, Dominicans, Franciscans, and other priests available to hear confessions and grant absolution. He also distributed a rosary to every man in his armada. Then, on the eve of battle, leading by example, he required that all his men take the spiritual sword of the rosary into their hands and pray it – and they did”

Fr Calloway continues to describe how the morning of the battle saw each vessel celebrate Mass after which Don Juan, knowing that his men had been granted a plenary indulgence by St Pope Pius V, raised the banner of the Cross on his flagship and addressed his men:

“You have come to fight the battle of the Cross – to conquer or to die. But whether you die or conquer, do your duty this day, and you will secure a glorious immortality!”

While Don Juan was giving words of encouragement to the men assembled for the physical battle, St Pope Pius V was assembling a spiritual army of pray warriors. He encouraged public devotion to Our Lady and her rosary and called upon all the confraternities to pray the rosary for the Pope’s intentions. On the evening of October 6, 1571, the night before the decisive battle, the Pope led the rosary at the Dominican convent of Santa Maria Sopra Minivera in Rome. With tears in his eyes and rosary in his hand, he entrusted the fate of Christendom to the Queen of Heaven.

On the morning of October 7, 1571, the Holy League of 285 vessels and 70,000 men set sail to engage the Muslim fleet head on. Don Juan had no idea he was going to encounter a Muslim fleet, led by Ali Pasha, of more than 300 vessels and over 100,000 men. The battle lines were now set and both sides had vision of each other near the town of Lepanto (now Naupaktos), Greece. The Christian fleet was in the shape of a cross and at the blast of a trumpet, the Christian men all dropped to their knees in prayer as the Crucifix was raised on each vessel. The battle was now on. The galley from Krk ‘Cristo Ressussitato’ was positioned in the left wing as the twenty-eighth ship in the first naval row, and the success of that wing was crucial for the victory. When galleys on the right Ottoman wing began to retreat, this enabled the left wing to help the Christian forces in the centre and in the right wing.

However, there was a problem for the Holy League. They were sailing into a thick headwind blowing against them and a thick fog engulfed them rendering them poor visibility and conditions for battle. This gave the Ottomans great comfort but little did they know that Heaven had another directive. At the same time, confraternities were praying the Rosary and storming Heaven with a petition for victory. Incredibly, Heaven heard their prays and the weather shifted. The wind changed and the fog lifted and the weather now favoured the Holy League who came at the Ottomans at full speed. The battle lasted for five fierce hours. Spotting the flagship boat Ali Pasha was on, Don Juan pressed forward to engage it in collision and hand-to-hand combat. Full of trust in Jesus and Our Lady, filled with the spirit of God, Don Juan danced with full abandon and trust on the deck of his ship. This act enraged Ali Pasha, but it was short lived. A musket ball hit him in the forehead and killed him. An armed prisoner on the Muslim ship freed himself and cut off what he could find of Ali Pasha’s head and hoisted it on a spike. The banner of Ali Pasha was captured and later taken to St Pope Pius who later displayed it at the Lateran Basilica. The Ottomans suffered a great loss, losing almost all their vessels. The Christians were able to free Christian galley slaves and the Holy League only lost 12 vessels. It was a complete victory for the Christians.

That evening, St Pope Pius V was in Rome in a meeting and suddenly got up and went to the window and as if in ecstasy, had a vision. He turned back to those in the room and jubilantly exclaimed, “Victory! Victory!”. The vision occurred more than 2 weeks before official word arrived in Rome from Venice. A decisive battle for Western civilisation by sea was won, just like the Croatian led army in Siget (Szigetvár) saved western civilisation on land.

The news of the victory spread throughout Europe and in that year alone, the confraternity of the Rosary grew by 30,000 members in Rome alone. Upon reading of the battle, one has to pause in wonder and admiration at the Rosary and the intercession of Our Lady. The Rosary which is the meditation on the life of Christ and His Mother, inspires us in our own battles. We all have a Siege of Siget (Szigetvár) or Battle of Lepanto in our life. Some have bigger battles than others, but nevertheless they are battles – whether physical or spiritual. Looking at the inspiration of men like Nikola Zrinski and Don Juan, we should all wield our rosary in prayer and daily storm heaven with reciting it in devout prayer and trust in God. Our Lady did not abandon her champions in that decisive battle of Lepanto and it is our call to be champions of the Rosary in our time. I am certain, like the devout men who put their trust in their Heavenly mother’s intercession, she will not fail us.

Our national history teaches us how difficult it is to be a Croat and a Catholic at all times, and what it is like to die “za krst časni i slobodu zlatnu” (for the cross of honour and the golden freedom). I want to leave you with the famous last words of Nikola Zrinski, when tired from battle, and having only 600 hungry and tired men with him, still full of faith in God, roused his men and led them into one last charge in the battle of Siget (Szigetvár). Against all odds, he drew his sword, held it high, and declared his intention to fight to the last:

“Let us go out from this burning place into the open and stand up to our enemies. Who dies, he will be with God. Who dies not, his name will be honored. I will go first, and what I do, you do as well. And God as my witness – I will never leave you, my brothers and knights!”

History of the Holy Rosary – Part 1