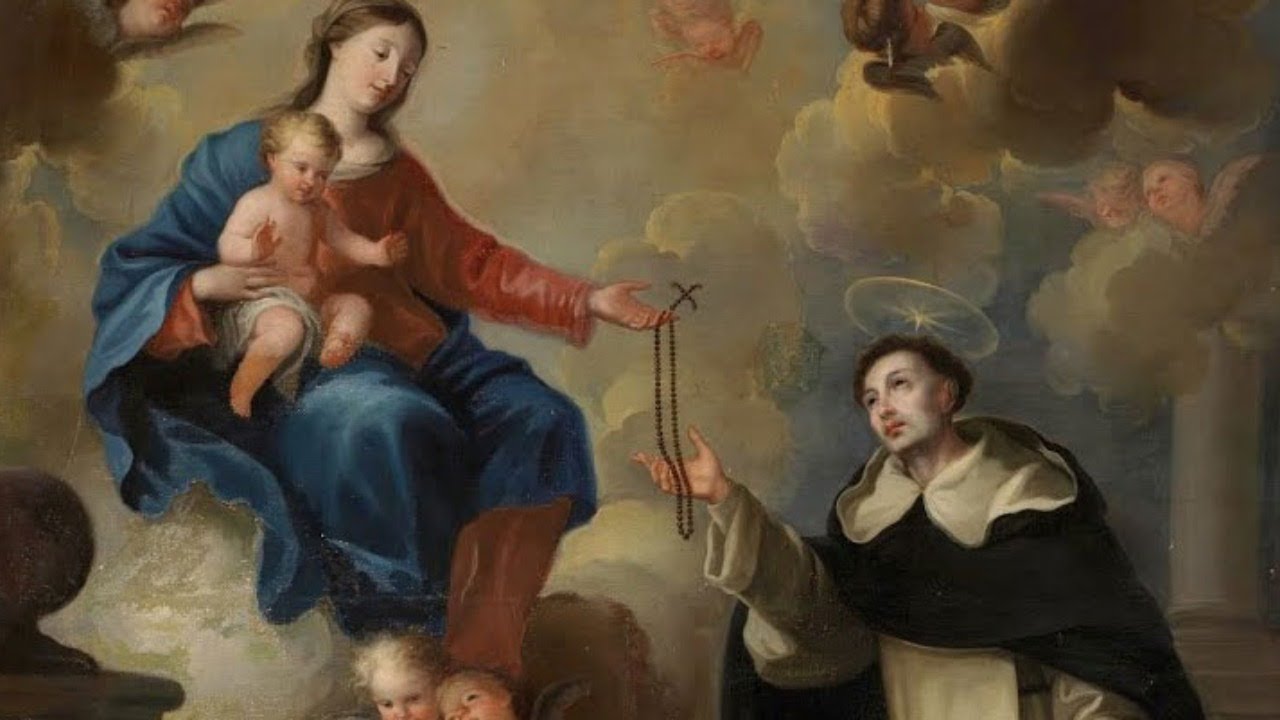 HISTORY of the ROSARY – Part 1

My earliest memory of prayer and the Rosary go back to when I was a little boy. At 4 years of age, I remember my parents teaching me the prayers of the Rosary. I often remember finding my father in prayer with Rosary in hand and my mother in prayer with her Rosary. These memories extend to the family Rosary, with my siblings which we recited especially on Wednesday’s and Fridays, each passing around the Rosary and taking a turn leading a decade. Although, I consider it a part of my growing up and an important factor in my spiritual life, I did not know nor understand the importance or the history of the Rosary. I just knew, in our Croatian household – we pray the Rosary!

The Rosary has been a major form of prayer in traditional Catholic history and has been the prayer of choice for many a Saint and devout Catholic, while for others, it has been more of an ornament, a decoration, hanging on the rear vision mirror of a car, or a Hollywood celebrity wearing it around their neck as a fashion statement. Rosaries are not decorations. History has shown many battles won because people prayed the Rosary. There have been countless hearts converted, heresy vanquished and impossible intentions answered too!

The aim of this first blog in a 5-part series, is to explore the origins of the Rosary. Most people don’t know about the origins of the Rosary nor how it came into existence. Prayers with beads like the Rosary, were practiced by monks in early Christian monasticism while they prayed the Liturgy of the Hours, praying the 150 Psalms daily. As many of the laity, and even lay monastics could not read, they substituted 150 repetitions of the Psalms with the Our Father (Pater Noster in Latin), sometimes using a cord with knots to keep an accurate count. This form of prayer became known as “the poor man’s breviary”.

Fr Don Calloway, in his book titled “Champions of the Rosary” relates how these prayer beads became known as “Paternoster beads” and many saints and Christians, even Crusaders up until the 13th Century, wore the beads as part of their religious attire. Just prior to the 13th Century, Cistercian monks, particularly men like St Bernard of Clairvaux (1090 – 1153 AD) and Blessed Isaac of Stella (1100-1170 AD) began to interpret the Psalms with a Marian dimension and influence and very soon the monks turned the prayer beads into another version. Very soon the Marian Psalter was made up of 150 Hail Mary’s divided into groups of 10 – called decades – interspersed with 15, Our Fathers.

This development made me reflect on how my own knowledge of the Rosary developed, with my parents teaching me the prayers contained in the Rosary, prayer by prayer until I was able to completely say the entire Rosary. I was taught the Our Father, the Hail Mary, Glory be, Apostles Creed, etc. Very soon, I was able to meditate on the mysteries while reciting these prayers. As I grew in spirituality, so did my knowledge of the prayers of the Rosary as well as the life of Christ and the Virgin Mary and knowledge of Biblical events. This set my foundation in the life of Christ as well as developing a routine that made time for prayer and meditation.

Turning to the 13th Century, the Church was engaged in a great battle against a heresy called Albigensianism, which taught that only the spiritual is good and that everything material is bad. The body was seen as evil and that a person’s soul is imprisoned in that evil body. A Spanish priest, St Dominic Guzman, traveled into France to preach against that heresy. An article in the Catholic Encyclopedia relates the legend of how St Dominic received the Rosary. St Dominic preached against the heresy and performed many fasts and penances, but was not achieving much success. Legend has it, that after retreating to a house near Franjeaux in 1208, he prayed and fasted for 3 days and nights, after which Our Lady appeared to him accompanied by three angels.

Our Lady said, “Dear Dominic, do you know which weapon the Blessed Trinity wants to use to reform the world”? “Oh, my Lady,” answered St Dominic, “you know far better than I do, because next to your Son Jesus Christ you have always been the chief instrument of our salvation.” Then our Lady replied, “I want you to know that, in this kind of warfare, the principal weapon has always been the Angelic Psalter, which is the foundation-stone of the New Testament. Therefore, if you want to reach these hardened souls and win them over to God, preach my Psalter.”

With this spiritual weapon, St Dominic rose and went quickly to the Cathedral and preached with zeal and passion, teaching and preaching the Rosary and with its power converting sinners and heretics. As Fr Don Calloway relates, this “was the moment the sword was unsheathed”.

In 1213, only five years after St Dominic was given the Rosary, Catholic forces under the command of Count Simon de Montfort were set to fight the Albigensians in Muret, a small town near Toulouse, France. The Albigensian heresy, determined to take over France, further spreading their heretical beliefs. The 1500 strong Catholics decided to make a stance and fight their foe of 30,000. The odds were against the Catholics, but little did the Albigensians know about heaven’s weapon! Confident of their upcoming success, the Albigensians spent the night before the battle celebrating in drunkenness and debauchery. The Catholics, on the other hand, spent their night, praying the Rosary with Holy Mass and the Sacrament of Confession. Finally, St Dominic went to the Church of Saint-Jacques in Muret to pray the Rosary for victory, while the Count went into battle. The Catholics were able to rush upon the hung-over Albigensians, routing the enemy army and declaring a victory for Christ and Our Lady. After the battle, every Catholic in the area attributed the victory to the Rosary.

This victory was a major setback for the Albigensian heresy and the power of the Rosary and the preaching of St Dominic achieved great success in defeating this heresy and error. As we continue to fight against heretics of one sort or another in our current day and age, this year we celebrate 800 years since the death of St Dominic and we remember him as a champion of the most Holy Rosary. The Rosary, a gift given by Our Lady all those years ago to St Dominic, remains a vital tool to winning the battle of good versus evil, and Truth versus falsehood.

Our next blog will explore further development of the Rosary and its revival by Blessed Alan de la Roche.