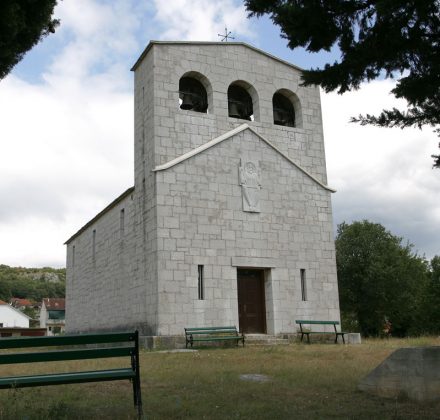 Next to the foundation of the ruined St. Mary’s Cathedral stands the votive memorial Church of the same name. This memorial church was designed according to the creative vision of Croatia’s most famous sculptor, Ivan Mestrovic, who also created the statue of Our Lady, depicted in a folk costume from Dalmatian Zagora, with a child on her lap who is writing the Book of Life. The church was erected in memory of Croatian national rulers and was consecrated by Archbishop (now Blessed) Alojzije Stepinac, on September 19, 1938.

SPEECH BY ARCHBISHOP DR. ALOJZIJE STEPINAC AT THE CONSECRATION OF THE CHURCH DEDICATED TO THE MEMORY OF KING ZVONIMIR

“Eight hundred and sixty summers have passed since Dimitar Zvonimir, king of our Croatian national dynasty, gave this place to build a cathedral in honour of the Mother of God, The Blessed Virgin Mary. Many tempests and storms have blown over the tree of our national entity from that moment to the present day. They broke so many of its branches, that it seemed they would eventually rip out the tree itself with its roots, and that our people and the Croatian name would disappear from the face of the earth. When we go through our whole bloody history in spirit, especially the age of wild Turkish incursions, we can, with peaceful spirits, say with the prophet: “Misericordiae Domini, quia non sumus consumpti” (“Mercy of God we are not consumed!” Lamentations 3:22). Others can look for reasons why we have survived where they wanted, for me it is and remains the final reason we did not perish—the mercy of God! Therefore when I had to determine the inscription for the great bell of this memorial Church, I did not tarry for very long on what to write. Having passed, in spirit, through many terrible and threatening perils, immediately an image from the Holy Scriptures came to mind. Moses, presenting a magnificent image of the great benevolence of God to the ungrateful people of Israel, says: “He (the Lord God of Israel) found them in a wilderness, a wasteland of howling desert. He shielded them and cared for them, guarding them as the apple of His eye. As an eagle incites its nestlings forth by hovering over its brood, so He spread His wings to receive them and bore them up on His wings. The Lord alone was their leader, no strange god was with him. He had them ride triumphant over the summits of the land and live off the products of its fields, giving them honey to suck from its rocks and olive oil from its hard, stony ground.” (Deuteronomy 32:10-13)

Remembering these and so many other of God’s good deeds, and as a small token of gratitude for the countless acts of God’s goodness towards our Croatian people, I placed the following inscription on the great bell of this memorial Church: “Omnipotenti Dominatori Christo, qui per secula multa populi Croatarum dux solus fuit, hoc signum in laudem et gloriam sempiternam!” (Christ Almighty Lord, who for many years was the only leader of the Croatian people, to you this sign of praise and glory everlasting)! Therefore, my dear Croatian people, may this memorial Church which today is being consecrated and the sound of its bells, when heard by you, remind you of two things: first, to be grateful to God for the past, for countless received graces, and second, that only in Him is your salvation in the future!

Everyone knows how fierce the battle is today against the Catholic Church in many parts of the world. They cast the worst slanders on the Church of God, ostensibly in the name of science. They cast the most vile lies and insults at the supreme head of the Church of God the Holy Father and the Chair of Peter, in the name of supposed freedom. They persecute Catholic priests, monks and nuns like wild beasts in many parts of the world, allegedly in the name of progress, culture and democracy.
They are destroying thriving Catholic schools in many parts of the world, supposedly for the enlightenment of the people. And here I say before you, numbered in the thousands, I say before the whole world, I say openly and clearly: almost everything that is beautiful and good in us, in our Croatian people, all the achievements of our culture, all our beautiful and honourable past, we owe to the Catholic Church, with whose head Pope Agathon our grandfathers made our unique pact and kept it to this day. I say, openly before the whole world, if God’s providence had not sheltered us under the maternal wing of the Catholic Church in a timely manner, we would have disappeared long ago from the face of the earth just as the wild Avars, Huns, Vandals and so many others had disappeared. And I dare to go even further and say this: if, God forbid, we would unfortunately fall away from the Catholic Church and discard its wonderful doctrine, we would quickly descend to the barbarism of African savages.

Just look around Europe, which seems to have decided in some parts to be done with the Catholic Church and its teachings, yet boasts of its culture. Is it culture to consider oneself a higher being – superhuman – and to despise another, when it is known that all men are in themselves dust and ashes, and by the mercy of God all children of one Heavenly Father? Is it culture to consider that only great nations have the right to life and small ones have the right only to be enslaved and serve the powerful, when we know from the words of Holy Scripture that “He Himself has made small and great and provides for all alike”! (“Pusillum et magnum ipse fecit et aequaliter cura est illi de omnibus” Wisdom 6:8) Is it culture when a brute force is set as the one measure of justice with the principle: either be eliminated or bow down – and the freedom of the human person and the dignity of man are overthrown and trampled upon? Is it culture, when someone else’s property is stolen only because they will not and cannot think and do what those who seized power by force think and do? May God spare our small nation from such enlightenment and culture! Let others do as they please! We will, as pleases Him, remain faithful within that Church which Jesus Christ founded and whose government He entrusted to St. Peter and his successors, the Roman bishops.

This Catholic Church, which is, in the words of the Apostle Paul, “columna et firmamentum veritatis” (pillar and stronghold of truth), was for our Croatian people the surest signpost and protection throughout life. She dignified him, she rejoiced with him, she wept with him and helped him in the days of trial and tribulation. She placed the royal crown on the head of his first king and made our people equal to the other Christian nations of Europe. She is, with her Supreme Head, The Holy Father, his most faithful and surest friend even today.

And that is why, with God’s help, we will celebrate, in three years time, in the most solemn way, the 1300th anniversary when the Croatian people first entered into union with the Holy Roman See. But just as this votive memorial church will encourage us to thank God for the graces we have received in the past, so may it be an encouragement to us not to give up in the future. We don’t know when the condition of the world looked as dire as it does today. Everyone is anxiously awaiting the hour when a massacre will break out such as the world has never seen before.
Nations are armed to the teeth. For small nations, there is no more justice on earth. They have become a toy, one played with by the great and powerful.
But if there is no justice on earth, we believe that there is in heaven and that Eternal Justice will finally prevail.

Therefore, my dear afflicted people, do not lose heart! For what are all these armed-to-the-teeth nations before Almighty God? “Omnes gentes quasi non sint, sic sunt coram eo quasi nihilum et inane reputati sunt ei” (“All nations are before him as if they had no being at all, and are counted to him as nothing, and vanity.” Isaiah 40:17). Therefore, the Apostle Peter was rightly able to say: “And there is no other salvation, for there is no other name in the land given unto men, in which we could be saved” except Christ the Lord, who was “given all power in heaven and on earth” (Acts 4:12) and who is the only “rex regum et Dominus dominantium” – King of kings and Lord of lords. (Det. 10:17). To Him, who brought our people into the lap of the Catholic Church and with His mighty arm protected, guarded and defended and vindicated it for thirteen long centuries in today’s homeland. To Him we turn our eyes in the difficult days of our present time. We are convinced of the truth of the words of Holy Scripture: “Timenti Dominum non ocuret mala, sed in tentantione Deus Illum conservabit et liberabit a malis” (“Whosoever fears the Lord, evil will not overtake him, but God will preserve him in temptation and free him from evil” Eccl. 33:1).

May this be brought to our minds by this votive church, a memorial of the living faith of our grandfathers, a memorial of our previous glory, and a signpost to a happier future.”

Original article in Croatian can be found Here

Biskupija near Knin was declared a diocesan Marian sanctuary by the then Bishop of Šibenik, Josip Arnerić, on August 17, 1979, on the occasion of the 900th anniversary of the Old Croatian Basilica of St. Mary, which was built in 1078 by the Croatian king Dmitar Zvonimir. At the beginning of this century, Fr. Lujo Marun discovered the foundations of the so-called Zvonimir’s basilica, as well as (until then) the oldest known figure of the Mother of God (Gospin Pralik) amongst the Croatian people, which is housed in the Archaeological Museum in Split. At this historical place, in 1938, the Franciscans of Knin, Ivan Meštrović and Jozo Kljaković, built, with the support and help of the people, the new church of St. Mary. She suffered severe damage twice, first being during World War II, then again during the Homeland War. It was first renovated in 1978, and the second time in 1998.