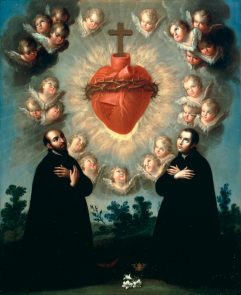 As I recall, my connection to the Sacred Heart began way back at the start of this prodigal son’s journey back to the Lord. It was sometime in the late 80s or early 90s that I heard Fr Euzebije Mak’s sermon on first Friday devotions, that is, the last of the 12 promises Jesus revealed to St Margaret Mary of Alacoque to those who practice devotion to His Sacred Heart:

“The all-powerful love of My Heart will grant to all those who shall receive Communion on the First Friday of nine consecutive months the grace of final repentance; they shall not die under my displeasure, nor without receiving their Sacraments; My heart shall be their assured refuge at that last hour.”

In short, in my mind that meant attendance at nine first Fridays guaranteed a person entry into heaven. I surmised that this was an easy way to get to heaven and one which would take less than a year, so my faith journey began more earnestly. (I might have thought at the time it would only take nine months, but praise the Lord, the journey has not ended and still continues to this day).

In AD2000, I started attending daily weekday Mass at St. Margaret Mary’s Church in Merrylands. At the time, I did not really notice or ponder on the name of the church or the saint it was named after. I chose the parish because it was the only other church nearby that offered daily Mass at an early hour. The church I was attending previously for daily Mass was more convenient in that it was on my way to work, but nonetheless, in hindsight I see that I was gently pushed away from it and led to St. Margaret Mary’s instead. Looking back now, I believe the Lord wanted me to leave and to go to St. Margaret Mary’s parish for daily Mass for a number of reasons, but primarily to point me in the direction of a deeper devotion to His Sacred Heart, still relatively unbeknownst to me at the time.

Many years later, in late 2014 or early 2015, in response to the faith and culture war that was intensifying around us at an alarming rate, a handful of men met for the first time to discuss the means to encourage and inspire other good men to take an active role in their faith, families and society at large. This first meeting led to the formation of the Knights of the Precious Blood. It was agreed that first Friday devotions would be a requirement for a knight of our order. Even at this point, the connection to the Sacred Heart devotions and St. Margaret Mary was still not fully realised.

As time went on, the commitments of a Knight of the Precious Blood were further developed, and by early 2018 it was agreed that enthronement of the Sacred Heart of Jesus in the family home was to become another essential condition of the order.

Later in the same year, the suggestion was made to commission the well-known Croatian artist, Charles Billich, to produce artworks of the Sacred Heart and Immaculate Heart for the Knights’ 2019 Annual Fundraiser. Inspired by this initiative, the talks held at the November 2018 monthly men’s breakfast focussed on devotion to the Sacred Heart of Jesus. It was only then that I started to ‘connect the dots’ so to speak, realising the significance of the parish name and the Sacred Heart devotion, and that it was most likely providential that I was attending daily Mass at St. Margaret Mary parish. Through my preparatory research for the aforementioned presentation, I came to realise the significance of the devotion to the Sacred Heart and the importance of the enthr

onement ceremony for our times.

In the process of planning for the inaugural Croatian Men’s Conference of March 2019, a graphic and logo for the conference was conceived; the logo became “Miles Christi – Za Vječni Dom Spremni”; the graphic chosen was that of the Croatian grb with the Sacred Heart in its centre. This graphic was inspired by our Lord’s messages to St. Margaret Mary on the 16th June 1675, when He requested that the French king add the Sacred Heart to his standards and weapons.

Whilst doing further research on the Sacred Heart devotion and enthronement of the Sacred Heart image in the homes and accompanying family consecration, I came across the story of the amazing priest who was responsible for the establishment and promotion of the enthronement crusade in a newsletter published by St Joseph de Clairval Abbey. The priest was Father Mateo Crawley.

This is our third instalment on this great devotion – more to come.