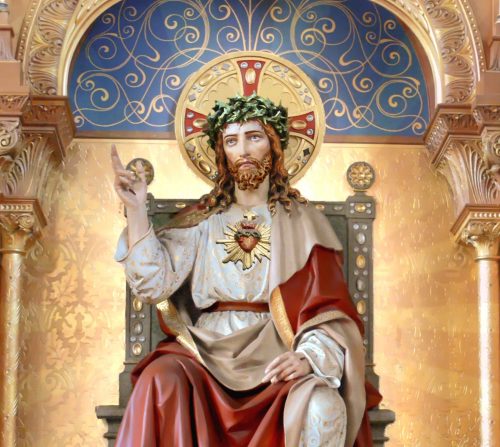 Consecration to the Sacred Heart is defined as the “formal dedication of oneself, of one’s family, community, society, or even of the whole human race to the sacred Heart of Jesus. Consecration implies a total surrender to the Saviour in gratitude for his blessings in the past and as a pledge of fidelity in the future.” – Hardon, John A. (2013) Catholic Dictionary

Private consecration to the Sacred Heart of Jesus became widespread in the Catholic world after the apparitions of St. Margaret Mary Alacoque were revealed. Known as the apostle of the devotion to the Sacred Heart of Jesus, St Margaret Mary was born at L’hautecour, France on the 22nd July, 1647; she died at Paray-le-Monial on the 17th October, 1690. Since then, the devotion has been cemented into Church history by the action and approval of many Popes:

“ And since there is in the Sacred Heart a symbol and a sensible image of the infinite love of Jesus Christ which moves us to love one another, therefore is it fit and proper that we should consecrate ourselves to His most Sacred Heart – an act which is nothing else than an offering and a binding of oneself to Jesus Christ, seeing that whatever honour, veneration and love is given to this divine Heart is really and truly given to Christ Himself.” – Pope Leo XIII in “Annum Sacrum – On Consecration to the Sacred Heart”

“But assuredly among those things which properly pertain to the worship of the Most Sacred Heart, a special place must be given to that Consecration, whereby we devote ourselves and all things that are ours to the Divine Heart of Jesus, acknowledging that we have received all things from the everlasting love of God.”– Pope Pius XI in “Miserentissimus Redemptor – On Reparation to The Sacred Heart”

In the midst of all the papal activity on the Sacred Heart devotion was born Father Mateo Crawley, the priest that conceived and developed the enthronement process, and who started off the crusade for the promulgation of enthronement of the Sacred Heart globally. Born on November 18, 1875 in Arequipa, Peru, he entered a school run by the Fathers of the Congregation of the Sacred Heart in 1885, joining the religious at the young age of 15. He was ordained to the priesthood on December 17, 1898 in the Cathedral of Santiago, Chile.
It was August 24, 1907. Fr Mateo was still a young man, but that night he came to the Chapel of the Apparitions (of St Margaret Mary Alacoque of the Sacred Heart of Jesus) in France, in a very ill and exhausted state. He recounted what happened next:

“I prayed, and suddenly I felt within myself a strange shock. I was struck by a blow of grace, at the same time very strong, yet infinitely gentle. When I arose, I was completely cured. Then, kneeling in the sanctuary, absorbed in an act of thanksgiving, I understood what Our Lord wished of me. That very evening I conceived the plan to reconquer the world home by home, family by family for the love of the Heart of Jesus.” (excerpt from the newsletter published by St. Joseph de Clairval Abbey, Lent 2008, March 03)

That trip to Europe in 1907 marked a turning point in his life and the beginning of Fr Mateo’s apostolate of promoting the enthronement of the Sacred Heart in homes, an apostolate to which he dedicated his life to from that fateful evening in 1907.
Later that same year he had the privilege of being received in a private audience by Pope Saint Pius X. During that meeting, Fr Mateo revealed to him his plan and asked permission to conquer the world for the Sacred Heart through Its enthronement in homes and the consecration of families to the Sacred Heart. After hearing Fr Mateo, the holy Pope replied:

“No, my son. I command you, do you understand? Not only do I permit you, but I order you to give your life for this work of salvation. It is a wonderful work; consecrate your entire life to it.” (taken from the newsletter published by St. Joseph de Clairval Abbey, Lent 2008, March 03)

On his return to Chile in 1908 Fr Mateo commenced the enthronement of the Sacred Heart in October. By 1911 there were an estimated 120,000 families in whose homes the Sacred Heart had been enthroned.
However, it was not all ‘smooth sailing’ for Fr Mateo in the course of promoting the enthronement in Europe. He experienced opposition from certain Bishops who had an issue with the word “enthronement”. He sought clarification from the reigning Pope of the time, Benedict XV, who granted him a private audience on April 06, 1915. Following on from the meeting the holy Father wrote him a letter of approval in which he formally defined the enthronement process as “the installation of the image of the Sacred Heart, as on a throne, in the place of highest honour in the house, so that Jesus Christ Our Lord visibly reigns in Catholic homes.” (Pope Benedict XV)

SIGNIFICANCE OF THE ENTHRONEMENT

The need for the enthronement and family consecration is more pressing today than ever before. The traditional family as we know it (as our Creator instituted it) is being attacked from all sides, from the incessant busy-ness of modern life and rampant divorce, to the global legislation of the redefinition of marriage and the erosion of the meaning of family itself.

“The family was and is the school of faith, the training-ground for human and civil values, the hearth in which human life is born and is generously and responsibly welcomed. Undoubtedly, it is currently suffering a degree of adversity caused by secularism and by ethical relativism, by movements of population internally and externally, by poverty, by social instability and by civil legislation opposed to marriage which, by supporting contraception and abortion, is threatening the future of peoples” (Benedict XVI, May 13, 2007).

“In our time, the natural family and the Christian family have become the principal object of attack for the destruction of the civilized world by the neo-Marxist gender ideology. Paradoxically, we are living in the age of the family precisely because it is under attack. It is today that the family is called to witness to the Divine beauty of its essence and of its vocation.” (Bishop Athanasius Schneider, extract from homily delivered at Chartres on Pentecost Monday in 2015)

The enthronement of the Sacred Heart of Jesus and family consecration is not intended to be a one-off celebration; it is meant to be a truly transformational event for the family where the family dedicates themselves to living for Christ daily, accepting Him as King of their family. In his letter to Father Mateo the Holy Father Benedict XV expounded the importance of the enthronement:

“ [enthronement] propagates above all things the Christian spirit in the home by setting up in each family the reign and the love of Jesus Christ. And in doing this, you are but obeying Our Divine Lord Himself, Who promised to shower His blessings upon the homes where the image of His Sacred Heart should be exposed and devoutly honoured. And because following Christ does not consist in allowing ourselves to be swayed by a superficial religious sentiment that easily moves weak and tender hearts to tears but leaves vice intact—it is necessary to know Christ, to know His doctrine, His life, His passion, His glory. To follow Christ is to be permeated with a lively and constant faith, which not only acts upon the mind and the heart, but likewise governs and directs our conduct.”

In 1945, a group of men attending a Sacred Heart congress and who expressed their intent of enthroning the Sacred Heart in their homes post-conference, were addressed by Venerable Pope Pius XII over the radio. He said to them:

“Your house, thus blessed, shall attain henceforth its proper end as a sanctified home, and may contain nothing which could offend the Eyes, the Ears or the Heart of Jesus. There, He is King, and He must receive, in your loyalty to Him, an uninterrupted tribute of reverence, respect and love. As the Supreme Lord of your home, He is interiorly connected with all of its life, and there may be in it no suffering, no joy, no fear and no hope in which you do not allow Him to participate. This is the meaning of the Kingship of Christ: all is sanctified.”

For those of us who decide to join the Knights of the Precious Blood enthronement of the Sacred Heart of Jesus in our homes and consecration of our families to Him is an essential step, myself included, let us remember the words of Joshua from the Old Testament: “As for me and my house I will serve the Lord” (Joshua 24:15). In undertaking the commitment to enthrone the Sacred Heart in our homes and families, we need to carefully consider and implement the following steps to ensure the enthronement is properly carried out.

In summary, the enthronement ceremony is not just a simple activity where you place an image of Jesus in a prominent place in your home. It is a re-commitment of the whole family to Jesus Christ and the social reign of Jesus Christ as King of our hearts and our homes. We consecrate ourselves to Jesus, making a covenant of love with Him. It is a source of strength and blessing for the family as our Holy Fathers Benedict XV and Pius XII have stated above. We can conclude with Father Mateo that “the Enthronement is the realisation of all the requests made by our Saviour to St. Margaret Mary, calling forth the fulfilment of the splendid promises with which the King of Love has enriched them” (Jesus the King of Love, p.3).

This is our fourth instalment on this great devotion – more to come.