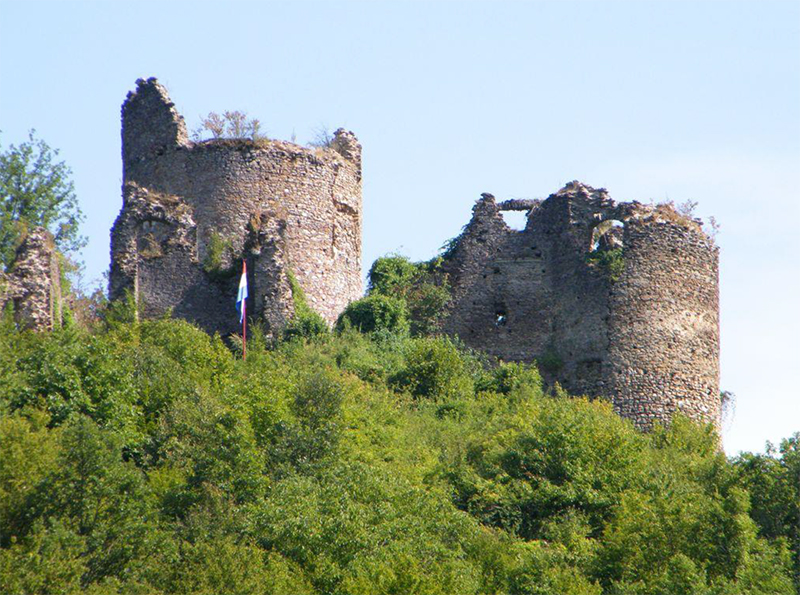 The Croatian fort Gvozdansko, on the road from Glina to Dvor na Uni, was established by the Zrinski nobles as a defense against the Muslim invasion into Croatia and Europe. After the fall of Dvor na Uni (then Novigrad) in 1556, Gvozdansko found itself under attack by the Turks. Several years prior to that, however, the fortification proved itself to be unconquerable. For that reason, in 1577, the Turkish Army built a bridge over the Una River which allowed them to bring in heavy artillery and troops.

On November 3, 1577, under the command of Ferhat Pasha, over 10,000 Turks surrounded Gvozdansko with heavy artillery. Among them were Turkish mercenaries made up of Orthodox Vlachs who also attacked their Christian brothers. Gvozdansko itself was defended by merely 50 soldiers from the Zrinski group, together with another 250 Croatian miners and peasants, along with women and children.

According to historical records, the winter that year was extremely cold, to the point that the bark on the trees was breaking off.

On January 9, 1578, Ferhat Pasha offered Gvozdansko’s defenders one last chance to surrender. The Croatian defenders, who were completely devoid of food, reason being that even the remaining pack of dogs they were forced to eat for survival were now being poisoned and killed by the Turks, rejected the call with the words: “It is better to die for freedom and the Cross than to surrender!”

Soon after that, Pasha attacked Gvozdansko with three great assaults, but each assault was repelled by the Croatian defenders.

The records state that on “that night of January 12th to 13th, 1578, Ferhat Pasha ordered his guard to collect more firewood and stoke a greater fire as he could not sleep because of the bitter cold. The air temperature dropped to such an extent that even the horses, who were out in the open, started dying from the cold. The sound of trees breaking under freezing conditions was heard throughout the whole night. In the fortress, however, everything was silent and the last fires were extinguished, which terribly disturbed the Turkish watchmen who immediately informed their commander. Pasha was not keen to begin the assault. Instead, he raised the alert and prepared his army for defense. The Turkish and Vlachian soldiers, nervous and fearful, spent the whole night monitoring the fortress.”

On January 13, the Turks undertook another assault, but this time they met no response from Gvozdansko. The Turkish soldiers entered the fort to discover a confronting scene: in the completely ruined fortress, with no food nor ammunition, were the frozen remains of the Croat defenders of Gvozdansko, icily preserved in their fighting positions.

The scene of the frozen Croatian defenders, together with the heroism they displayed, so shook and impressed the Turkish commander, that he ordered a Catholic priest be brought in to bury the Croatian soldiers with a Christian burial, coupled with military honours. In addition to being captivated by the Croat heroes, the few remaining Croatian inhabitants of the entire region were relieved of the heavy taxes and tolls that other Turkish-occupied lands were burdened with.

In the numerous battles for freedom throughout the history of the Croatian people, Gvozdansko shines among the brightest stars in the sky.

Superb military skills, resistance down to the last man, and a conscious sacrifice for the homeland have made Gvozdansko a symbol of Croatia’s desire for freedom and its resistance to foreign invaders. The defense of Gvozdansko is to Croatian history what the Masada is to Jewish history, or the Alamo to American history. It is for this reason that every Croat must become familiar with this unique event in his history.

During World War II, precisely on Christmas Day in 1941, Tito’s partisans killed 55 Croatian Catholics who were returning home from Mass, including 13 members of the one Grabarevic family. In the Homeland War, Chetniks killed 3 Croat civilians in Gvozdansko and burned down the Catholic Church. Following its glorious and bloody history, there remain only a few older Croats living in Gvozdansko today.

For some more information on The Fall of Gvozdansko